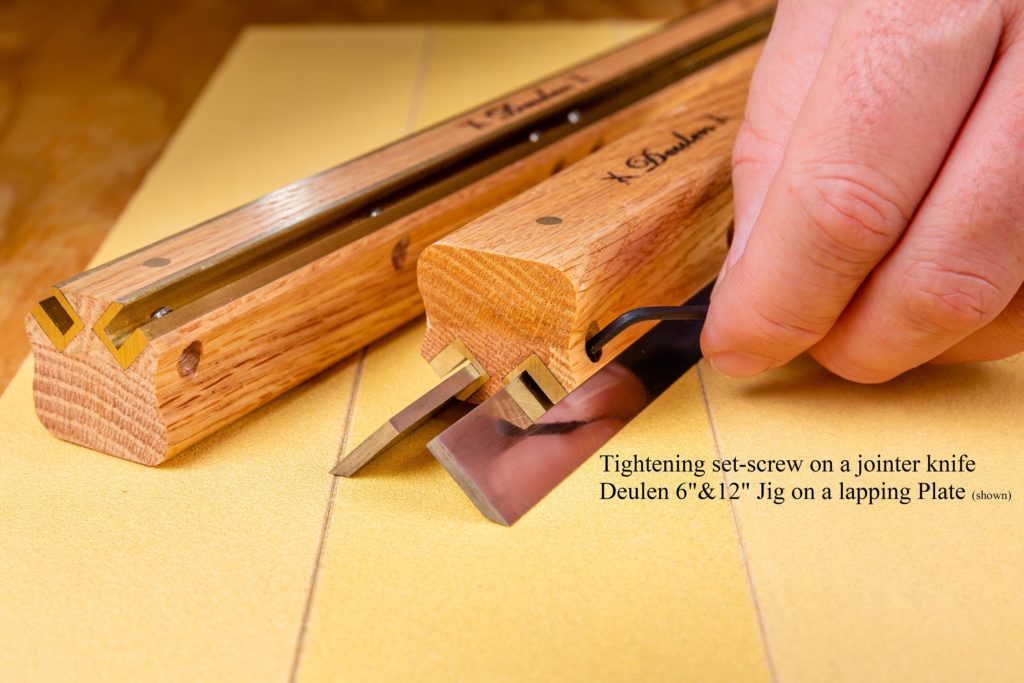 Jig lets you quickly touch up dull or nicked knives

Because it costs about 75 cents per inch to sharpen steel jointer and planer knives, I tend to wait longer than I should between sharpenings. But with Deulen Tools’ knife-sharpening jig I can hone those knives myself. After three or four sharpenings the jig has paid for itself in the savings. This jig holds two knives at a 90° angle to each other, bevel edge down, while you stroke it


Just a note to let you know how much I am impressed with the 12″ Deulen sharpener that I ordered from you. This is an excellent jig for my small shop. I do not do any production work on a large scale. Just do cabinets, desks and tables for myself and family. But this jig really shined when I sharpened 6 of my jointer knives and 4 of my planer knives. Before I got the jig, I thought I was doing a fine job sharpening these knives by hand. When I did them on the jig, it was easy to see the ridges and valleys that I missed in the hand sharpening. It was nice to see them come out straight and even. You did a great job designing and building this jig. I have already spread the word to my woodworking friends (they are retired wood technology instructors at the University of Wisconsin – Stout where I also taught) who work with me on Habitat for Humanity houses around our community. Again, this jig is ideal for my purposes where I need to sharpen my knives only once or twice a year. Nice job!!!!! Also thanks to Wood Magazine for clueing me onto this tool in their October issue.

Bob HunterTools Editor
Read More
I recently received the 12″ sharpening jig through your E-Bay site. I Sharpened 2 sets of 6″ knives that were extremely dull with nicks. It took about 15 minutes to “sharpen” both sets. I will get on the 13″ knives this weekend. I plane walnut, persimmon and sometimes Osage orange along with the softer woods and keeping knives sharp was a pain. Your product is simple to use and does a fantastic job. Wish I would have thought of this!! Carl Lawson Minden, LA I’m glad to hear business is going well, Dan. And we appreciate your kind words of our review. Ultimately, that’s our goal as a magazine: To inform readers of new products, techniques, and projects that will interest them or enrich their woodworking experience. We still use the set you sent us in our shop to sharpen knives all the time and they still work great
A true quality tool & company
Read More
My current project, made with 100+-year-old reclaimed wood, means that my planer is going to see substantial use. Knowing that the two sets of blades that I had were less than ideal sharpness I started to look into this jig as a way to save myself some money in the long run. My idea of “quality” is apparently at a much higher standard than most manufactured goods nowadays, so when I purchased the Deulen Tool 12” sharpening jig I was “hoping” for a quality piece, but “expecting” something much less. However, I was immediately impressed with the fit and finish of this jig as well as the caliber of material it was constructed from. Eager to sharpen a set of blades I set to it. However, I was almost immediately dismayed to see that the blade on one side of the jig was sharpening mostly in the middle. This immediately told me that the blade was bowed. Some thorough checking with a straight edge and feeler gauge confirmed my suspicions, the blade was straight, but the jig bowed it by 0.010” when installed. Being what it cost; I was expecting to get what I paid for. Long story short, I contacted Deulen Tools (Dan himself) and was utterly surprised to end up with a brand-new, updated design jig less than 2 days later. Dan explained to me that they went through an outsourcing period for some of their manufacturing only to find out that they had to throw away 200+ sets of the brass guides as they were NOT up to his standards. Apparently, I got one that was sent out before the flaw was discovered. He also explained to me his improved manufacturing and quality control standards now in place. This new jig is even more impressive than the first. Heavy for its size and truly an heirloom piece. Deulen Tools is honestly concerned with putting out a quality, long-lasting product and Dan’s personal concern for customer satisfaction is second to none in my book. I would buy from Deulen Tools again without hesitation.
Previous
Next
Cart Item Removed. Undo
Checkout - $0.00
Scroll to Top